Barbets are our great passion, therefore there is nothing impossible for us. We drove over 10 thousand kilometers to bring to our country the best lines of these dogs. We put a lot of heart and commitment in breeding. 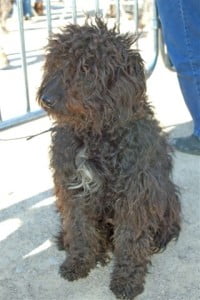 Barbets in the past have been crossed with many breeds, now the time for the two most interesting. First amazing breed that fate brought to Barbets, is Berger de Crau, is probably the best translation would be Shepherd of the Crau (Crau is a very small region in Provence, cradle of the breed ). Breed is not recognized by the FCI although its history dates back to at least the 19th century. These are working dogs in the very true sense of the term. The nature of daily activities, of course, determines the characteristics of the dog. What matters most of all is utility. First of all – a willingness to work, courage and intelligence. Secondly, the physical characteristics – appropriate size (medium), power, strength, lack o health problems, dense coat – that protects dogs during cold nights … and of course no one will brush those dogs on daily basis. One of these dogs – BALTHAZAR, was used in the breeding Barbet, at the beginning of the 20th century.

The second interesting breed, but unfortunately almost extinct today, is Griffon Boulet. Here a digression, Griffon is the common French name of a group of hunting dogs, with abundant hair and dense undercoat, capable of operating in water and on the bloodtrack. For a long time Barbet, was counted among the Griffons. At shows and advertisements was called Griffon Barbet, and belonged to the 7th group of FCI (then – les griffons d’arrêt). Then in 80’s Barbet was moved to group of water dogs, and many of today’s breeders don’t care about and don’t develop the hunting qualities of Barbet, although this is still a hunting breed.

Griffon Boulet – breed originated in the nineteenth century as a result of work of Emmanuel Boulet. The purpose of breeding, was to create a breed of long-haired pointers (as opposed to the shorthaired -Griffon Korthals) capable of operating in a harsh environment. 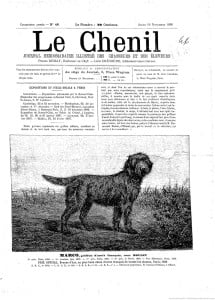 For the purpose of breeding used dogs were woolly coated, crossed with Barbets and other French breeds including the Shepherds. At the turn of the 19th and 20th century, Griffon Boulet was a star of the French cynology( along with Griffon). In the magazine “Le Chenil” there was no issue without few words about the breed. MARCO, was the first dog 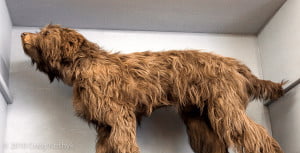 registered with the French Stud Book, ten further entries were also Griffon Boulet. Unfortunately, at a time when the French breeds of hunting dogs were developing, the “invasion” of excellent English breeds started. Many French breeds could not survive for lack of interest, the other as the Griffon Boulet and Barbet lost much of its popularity. In the 70’s, it would appear one of the last Griffon Boulets, was included in the breeding of Barbet. To this day, some Barbets confusingly similar to images of Griffon Boulet, often light brown coat with wavy hair

For the admirers of Griffon Korthals – interesting fact, that among the so-called. “seven patriarchs” (dogs that gave the foundation to this breed) there was Barbet was called Janus.

The old breeders, made the selection of dogs with simple logic. Passion for work and intelligence, plus physical quality to make Barbet be able work in the field (average size, compact but strong build, wide feet – not sinking into marshy ground, strong short neck – to be able to carry the game with his head held high, wide muzzle, large nose – for finding the wind, abundant hair is easy to keep clean, etc.). There is no reason or sense to step down the road that was once chosen for Barbet as a hunting dog.

Magnificent Ottavia, still goes by the name of the Griffon (Gryphona), may we have many working in field Barbets with their best qualities so they could be called Griffons once again